A good app can do so much. It will organize your smartphone, connect you with friends and keep you company on those long trips to the bathroom. And while everyone loves a good mobile game, there are plenty of non-gaming apps that make everyday life much easier. So which are the most popular? We have the data here.

According to a recent SensorTower study, the top 10 apps have had a serious overhaul since Q1 2017, and only a few of them will surprise you. On the one hand, WhatsApp remains at the top of the global list, but has been overtaken in the Google Play Store. However, Facebook was able to win most of the top five with Messenger and Instagram, a more than adequate consolation prize for the social media giant. However, much to Facebook’s chagrin, Snapchat, perhaps its fiercest rival, managed to make the top five in the world.

Outside of the top five, there are a number of takeaways that shouldn’t be ignored. On the one hand, Youtube, despite being automatically downloaded to all Android devices, still managed to come out of the top ten, as the second most downloaded application on the App Store. Likewise, although it was not in the top ten for each platform, Spotify ranked tenth with relatively large downloads on both platforms, but outside the top ten.

The US roster, however, tells a very different story. With Messenger taking first place across the board and Snapchat claiming a notable second place overall and on Google Play, that rivalry may be much closer than we thought. Another important point to remember is that Uber is overtaking Facebook in the Apple Store for the first time in new iOS installations. 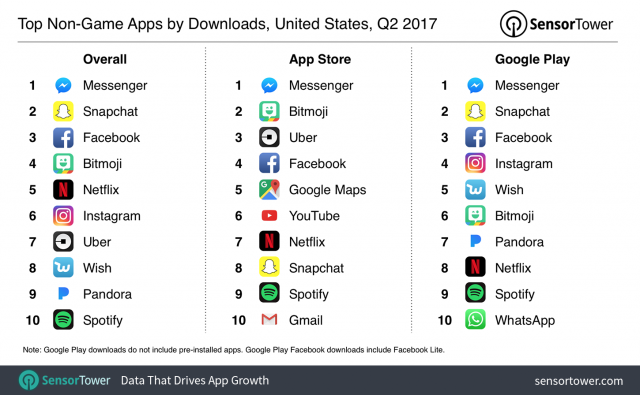 If you want to find out what else is going on in the app world, view the full report here and check back with TechCo for more reports and rankings.